Canadian Government Announces Marijuana Will Be Legal Next Year! 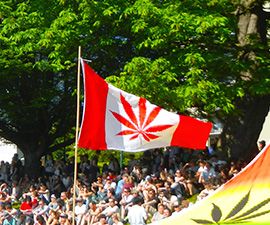 The current government ministers are going over the final details before they release their Liberal marijuana legalization plan. In late March of this year CBC News first reported the Liberal government will announce legislation in the week of April 10th that will legalize marijuana in Canada by July 1, 2018. The legislation will follow the recommendations of a federally appointed task force that was chaired by former justice minister Anne McLellan.

On Thursday April 13th, Prime Minister Justin Trudeau introduced into parliament legislation to legalize the recreational use of Marijuana in Canada. According to this legislation, each province will decide how they will distribute and sell cannabis within their borders and be responsible for the taxation and methods of sale.

Though the exact details of price and distribution are not finalized yet there are some rules and regulations that have been announced. The age to purchase marijuana will be set at 18, though provinces and raise that number if they wish. Each person will be allowed to carry no more than 30 grams (about an ounce) and households will be allowed to have up to 4 plants at a time.

According to reliable sources who are responsible for handling the roll out of the plan, some of the critical points of the task force include;

Health Minister Jane Philpott stated, “Our responsibility as government is to make sure that we have appropriate regulatory mechanisms in place, that we have public health measures in place.”

There is still uncertainty regarding paying duties on marijuana sales as this is not the main focus of the task force.

The senior government official said the bill would propose putting the federal government in charge of licensing the producers ensuring the country’s marijuana supply is safe and secure.

While the Provinces may appear to be set to approve the legislation, they all are concerned about regulations, and burdening their respective provincial dollars, in addition to keeping people safe.

Quebec Premier Philippe Couillard told reporters “We should also be careful not to add too [many] responsibilities on the shoulders of the provinces — for example, regulation, implementation, how we will test people for this. We want to make sure that everybody will play [their] part in the implementation of the bill.”

The Nova Scotia Justice Department released a statement that said the province has not come to a decision on how marijuana will be distributed, but “will be guided by protecting public health and safety and focusing on a legal market.”

Ontario Finance Minister Charles Sousa said the province is still considering its options on how marijuana sales will be handled.

“The recommendation is to have government oversight in regards to how it’s distributed. The Attorney General’s Office already does a lot of that be it in alcohol, be it in tobacco, be it in spirits, wine, beer,” Sousa told reporters at Queen’s Park. “Those models exist and we’re looking at putting something in place that would be most appropriate.”