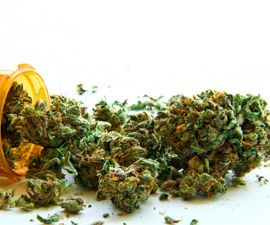 It is not uncommon for the average person to associate weight gain with medical marijuana use as there is so much talk about experiencing ‘the munchies’, however, a recent study revealed that cannabis doesn’t necessarily have much impact on your waistline. Researchers studied over 700 adults aged between 18 and 74, based on a Nunavik Inuit Health Survey, and found that, compared to people who didn’t smoke marijuana, the pot smokers had lower body mass index (BMI) scores (26.8 versus 28.6, respectively). It was also noted that those who smoked pot had a reduced risk of developing diabetes.

The objective of the study was to ascertain the relationship between cannabis use, obesity, and insulin resistance, and it concluded “Cannabis use was associated with lower BMI, and such an association did not occur through the glucose metabolic process or related inflammatory markers…these associations were attenuated among those who reported using marijuana at least once but not in the past 30 days, suggesting that the impact of marijuana use on insulin and insulin resistance exists during periods of recent use.” It was also noted these study participants found smaller waist measurements than those who did not smoke marijuana.

In addition to the weight control and diabetes prevention and management that these studies suggest, marijuana use has often been associated with a range of positive health outcomes. For more information on this study go to the Conference of Quebec University Health Centre, McGill University, Montreal.