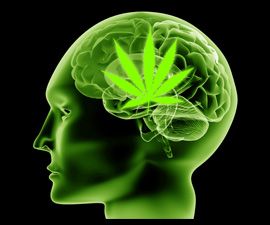 For the first time, researchers have completed a study that proves medical marijuana can treat migraines. A study like this has never been done before due to federal regulations preventing scientists in the U.S. from obtaining cannabis for research. Throughout the years, migraine and headache sufferers have turned to smoking pot to alleviate their pain, but this is the first time scientific evidence exists to back up their claims.

Researchers at the University of Colorado Anschutz Medical Campus gathered 121 participants who were diagnosed with migraines. They treated them with medical marijuana between January 2010 and September 2014, and found that their migraines were reduced from over 10 a month to less than five per month. The majority of participants — 103 of them — reported a decrease in migraines overall. And only three saw an increase in migraines over the course of the trial.

The trial participants used cannabis in different ways, too — either smoking or eating it. Inhaling marijuana was shown to be the most preferable way to treat headaches, since its effects occured sooner than those who used edibles.

The researchers call the results “significant,” and said they may potentially offer a way to jumpstart migraine treatments in states where medical marijuana is legal — or at least trigger more research. The list of states that have legalized medical marijuana is now up to 23, including California, Maryland, Massachusetts, New York, and Washington.

However, the researchers still remain cautious with how they present their results, noting that not everyone should turn to weed to cure their headaches. Marijuana affects everyone differently, and it can have negative effects on health, too.

“There was a substantial improvement for patients in their ability to function and feel better,” said Laura Borgelt, a professor at the Skaggs School of Pharmacy and Pharmaceutical Sciences and an author of the study, in a press release. “Like any drug, marijuana has potential benefits and potential risks. It’s important for people to be aware that using medical marijuana can also have adverse effects.”

Regardless, the study is an addition to a growing body of scientific evidence that cannabis holds more potential power for health benefits than the “War on Drugs” would like to admit. Research has shown that cannabis may have benefits for people suffering from mental health disorders, like stress, anxiety, and post-traumatic stress disorder (PTSD). It has also been used to treat epilepsy, neurodegenerative diseases like Parkinson’s disease, and alleviate the painful side effects of cancer treatment. One recent study also found that smoking weed was linked to a 50 percent lower chance of developing metabolic syndrome and its symptoms, which include high blood sugar, high blood pressure, and high cholesterol. Some physicians are even clamoring for the right to use medical marijuana to treat glaucoma, an eye condition that may cause blindness.

More research will be needed to determine how exactly cannabis reduces migraines. “We believe serotonin plays a role in migraine headaches, but we are still working to discover the exact role of cannabinoids in this condition,” Borgelt said.