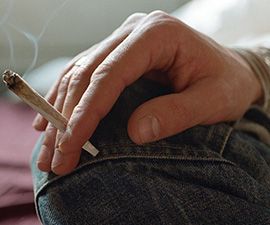 Recent news reported in The Canadian Press suggests not all medicinal marijuana is created equal.

As medical marijuana becomes increasingly mainstream and Canada moves toward legalizing the substance, health experts are emphasizing the need for doctors and patients to consider the often serious side effects linked to the various ways of consuming the drug.

An addictions specialist;Paul Farnan says “We know there’s something in opium that helps pain, and we’re able to pharmaceutically develop morphine and other analgesics, but we wouldn’t say to people, ‘You have pain? Why don’t you smoke opium?’ …We think there’s some stuff that cannabinoids will be helpful for. Why don’t you just smoke cannabis? First of all, cannabis is actually a really dangerous thing for your lungs.”

Mikhail Kogan, medical director of the Center for Integrative Medicine at George Washington University in Washington, D.C., said he sees no reason for people to smoke marijuana medically anymore.

It’s difficult to absorb enough of the drug through the lungs, and gastric acids interfere when someone eats it, he said, adding that it’s more effective to take the drug by other means, such as under the tongue.

“Rectally is actually a lot more preferred because of the volume of absorption… but not everybody is open to this way of administration,…the majority of people still smoke because it’s the most available method.”” Kogan said.

Health Canada’s website reads “Many of the chemicals found in tobacco smoke are also found in cannabis smoke.”

The Canadian Medical Association has no formal position on the consumption of medicinal pot, but it officially opposes the inhalation of any burned plant material.

Association spokesman Jeff Blackmer added that many physicians are reluctant to prescribe medical marijuana because of the absence of peer-reviewed research into whether the drug is medically effective, its possible side effects, appropriate dosage and more.

A “strong majority” of doctors would prefer not to be involved as so-called gatekeepers to medical marijuana and  Blackmer continued to add that the Canadian Lung Association, urged patients and doctors to take lung health into consideration when discussing medicinal marijuana.

Colette Rivet, head of the association that represents licensed cannabis producers in Canada, said that while the industry is against smoking medical marijuana, ultimately it can’t restrict what patients do.

“We know that there’s an issue with smoking. However, we can’t control it at the patient level,” Rivet said.

“We’re trying to develop new product forms so they would be more inclined to go away from that.”

Each licensed producer has its own unique document that physicians fill out when prescribing medical marijuana, which includes a minimum amount of information required by Health Canada, Rivet said.

Beyond that, some companies ask whether a patient would prefer dried marijuana or oil, while others don’t, she added.

A Health Canada spokesman confirmed that patients oversee requesting the form of medical marijuana they prefer, whether dry leaf or oil, and they are not restricted in how they wish to consume it.

The sale of edibles is banned, but a June 2015 decision from the Supreme Court of Canada ruled medicinal marijuana patients have the right to prepare their medication however they want, including cooking it.